It's time for Kelley Lynn's reveal for FRACTION OF STONE. I'm so excited for her!

But first, a few words from Kelley and a fun interview with her characters....

Thanks for helping me out with my cover reveal Jackie! Hopefully you'll all like getting to know Rydan and Akara better, since Jackie was able to get them to stop for a few minutes on their journey. Jackie, take it away!


Jackie: Who's your celebrity crush?
Rydan: Hmm, this is a great question, Jackie. *winks*. In Casden there are quite a few celebrities. I would have to say one of my favorite is Siveen. She is one of the most talented gypsies I have ever seen.
Akara: *roles her eyes*
Rydan: *laughs* Why are you rolling your eyes?
Akara: No doubt her talent is beauty.
Rydan: *laughs* You know me so well. *nudges Akara and gets no reaction. Looks back at Jackie.* Siveen is quite talented too though.

Jackie: Do you have a favorite superhero?
Rydan: *Looks at Akara* She's not really that talkative. I'll go first again. I guess my favorite superhero would have to be the leader of my people, Hermiscus. He's a strong and determined man, always looking out for us. We had a little misunderstanding but after we iron out some things everything will be right again.
Akara: A little misunderstanding? He's trying to kill us.
Rydan: *nervously laughs* Akara, you're exaggerating. He is not.
Akara: ....
Rydan: How about the next question?

Jackie: Of the two, would you rather snow ski or water ski?
Rydan: I have never heard of these. What is snow? I do like water. So perhaps I would like that better. What about you Akara?
Akara: *shrugs* I would rather just be left alone so we can continue on.
Rydan: Well... *smiles at Jackie* Sorry about her. Next question?

Jackie: What's your favorite Girl Scout cookie?
Rydan: *looks at Akara and shakes head after she doesn't answer* I have never heard of this particular kind of cookie, but the palace cooks make the best food. I'm not sure I could pick a favorite but they have to be warm. *smiles widely and gives Akara a friendly shake* Come now Akara, you must have a favorite cookie.
Akara: *Looks at Rydan, then at Jackie* I've never eaten what you two are talking about.
Rydan: No way? You've never had a cookie? Well, we'll have to fix that later tonight.

Jackie: If you could, for one day, be a rock star or a doctor, which would you choose?
Rydan: A... rock star? I have never heard of this. *belly laughs* That is one of the funniest things I've ever heard. Is there a star inside a rock? Or a rock in the shape of a star? Do people do this as a profession? I am so confused *laughs, eyes sparkling*
Akara: *Shrugs at Jackie* Rydan actually makes a pretty good doctor.
Rydan: *laughing immediately stops* Thanks Akara. I think that might be the first compliment I've ever gotten from you.
Akara: We've only known each other three days.
Rydan: True. *laughs*

Jackie: Word association time! What's the first thought that comes to mind when I say the following:

**Waffles
Rydan: Oh, how I wish I could have a good palace breakfast. Someday soon. *rubs stomach*
Akara: What are those?

**Romeo & Juliet
Rydan: I have never heard of these two. Are they your people, Akara?
Akara: *shakes head* Not that I ever heard.

**Christmas lights
Rydan: Hmm, must admit. I've never heard of this one either.
Akara: *shrugs*

**Canteen
Rydan: Water. *takes his off his horse* Would you like some?
Akara: We need that Rydan.
Rydan: *brows scrunch* We'll find more Akara. She looks thirsty. *brushes hair out of his face and winks at Jackie*
Akara: *waits for Jackie to finish* Okay, now we really should go. Who knows who's looking for us.
Rydan: *nods* Good point. Well it was nice meeting you Jackie. Hopefully we'll have more time to talk after everything settles down a bit! 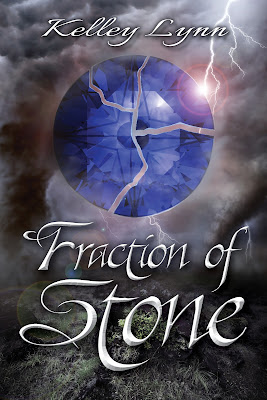 Fraction of Stone by Kelley Lynn

Wind tunnels, torrential rains and earthquakes tear apart Casden. The cause of the world’s imbalance is unknown, but the mounting occurrences suggest there’s little time before life ceases to exist.

Rydan Gale and Akara Nazreth are the only humans with the ability to wield magic. The tattoo on their necks and the discovery of an ancient book, dictate they are the key to the world’s survival.

But the greatest obstacle for saving mankind isn’t the bizarre creatures, extreme betrayals and magic-fearing men hunting them.

It’s that Akara doesn’t believe the world is worth saving.

To embed in blog post paste this into your html: 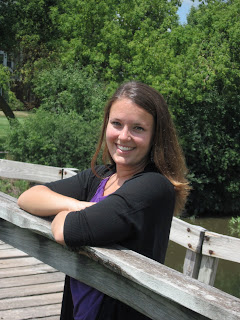 Eventually the day came when the voices in Kelley Lynn’s head were more insistent then her engineering professor’s. So instead of turning to her Thermodynamics book, Kelley brought up a blank page on her computer screen and wrote. Somewhere along the way she became a Young Adult author.

Kelley was born and raised a Midwestern girl. She’s not afraid to sweat and fills her free time with softball, soccer and volleyball. (Though you probably don’t want her on your volleyball team.) She occasionally makes guest appearances as a female vocalist for area bands.

You can find Kelley hanging out at her blog, titled in her name, as well as the group blog she shares with her fellow critique partners, Falling for Fiction. Kelley is a member of the Society of Children’s Books Writers and Illustrators.