Toni De Palma's cover reveal for The Devil's Triangle is here! Take a look at it, and the book blurb. Amazing. I can't wait to get my hands on this! 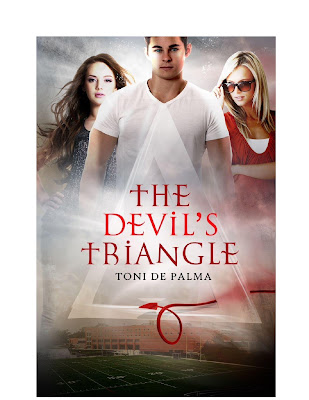 
When 17 year old Cooper dies in an attempt to burn down his school, he finds himself in the afterlife. Lucy, the Devil's sister who has crossed party lines, decides to give Cooper another shot at heaven. The deal? Cooper returns to Earth and has to find a girl named Grace. The rest is up to him.
While Cooper figures out his mission, he's thrown into the life he's always wanted. Great parents, a spot on the Varsity football team and a real future are all within reach. But what he really wants is Grace, a feisty girl with an abusive boyfriend that can pound Cooper into pulp if he doesn't watch out.
While Lucy plays demonic-puppeteer, clues to an unknown past between Cooper and Grace start to unravel. Cooper discovers that what's keeping he and Grace apart is far more sinister than anything this bad boy could have ever imagined.

You can find Toni and The Devil's Triangle by clicking on the following sites: