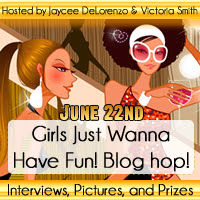 It's time for the Girls Just Wanna Have Fun! Blog hop!
Thanks to Jaycee @ Jaycee DeLorenzo's Blog and Victoria @ Confessions of a Twenty Something Fiction Writer for hosting this!!!

You can go HERE OR HERE for the details and list of participants.

Kara and her grandma are characters from my current project, WISHFUL THINKING, a YA urban fantasy, as of now.  There won't be any urban fantasy stuff below, though. Just a nice time between grandma and granddaughter. 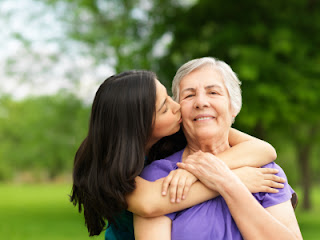 Kara wheels her grandma into the community lounge of the nursing home. Pale yellow curtains cover the windows, filtering sunshine throughout the room. She parks her grandma’s chair near one of the sofas and flips the brake lever so Gram doesn’t go off roading during their time together.
“What shade would you like today?” Kara fishes through her purse and pulls out two bottles of nail polish. “Marvelous Mauve or Pink Passion.”
“Is that purple?” Gram’s green eyes crinkle around the edges as she stares at the mauve bottle.
“Sort of.”
“Let’s go with the pink one,” Gram says.
Kara flops down on the sofa. “So, any guys try to steal your heart yet?” She rolls the bottle of nail polish between her fingers then unscrews the cap.
“There’s only one man for me, dear.”
“Grandpa?” Kara brushes a coat of pink over her grandma’s brittle nails.
“I’ll always love your grandfather, God rest his soul, but I was referring to Paul.” She tips her chin toward a group of four older gentlemen playing a card game.
One of the men could be Sean Connery’s twin. He looks over at Gram, gives her a wink, then focuses on his game again.
“Aw. Gram.” Kara’s heart squeezes in her chest, and she smiles. “You’ve found love again.”
“Don’t marry me off just yet.” Gram swats the air. “We’ve only spent a little time together, but I like where it’s headed.” She removes a piece of paper from her shirt pocket, careful not to smear her nail polish. “But we’re not supposed to be talking about me. These folks want to hear about you. Remember?”
“Yeah, I know. The Girls Just Wanna Have Fun Blog Hop.” Kara squirms on the couch. “I don’t like having attention on me.”
“Well, you best get over that now, huh?” Gram lays the paper on her lap. “First question. Has anyone caught your eye?”
Kara dips the brush into the bottle before moving to her grandma’s other hand. “His name’s Jagger.”
“He wouldn’t be the same Jagger that volunteers here, would he?”
Kara nods. “He’s not here today, though.”
“Well, slap my tush and call me Lady Gaga. That Jagger’s a real looker.”
“You don’t have to tell me twice.” Kara blows on her grandma’s fingernails then places her hand on the arm of the chair. “I really like him, Gram.”
“That brings us to question two. How would you describe your hero?”
“He’s so sweet. And respectful, confident, hot, and a great—” Kara stops then grabs a bottled water out of her bag.
“Great what?” Gram hedges. “Kisser?”
Kara’s cheeks fill with heat.
“Honey, I’m seventy years old. Don’t you think I’ve heard it all by now?”
“I suppose.” Kara shrugs then grins. “We’ve only kissed once, but it was amazing.” She takes a sip of her water.
“I bet,” Gram says. “Okay, boxers or briefs?”
Kara coughs, the liquid stuttering its way down her throat. “Oh, my God, Gram!”
“Hey, I’m just the messenger. Jaycee and Victoria wrote this list for me.” Gram pats the piece of paper. “I happen to like these questions.”
“Fine.” Kara stands and tosses the bottle on the sofa. “Boxer briefs.”
“What’s one thing you believe you can tell a lot about a person?”
Kara digs a hairbrush out of her purse. “How they treat their loved ones.” She slides the bristles through her grandma’s hair. “If they’re mean to someone they love, I know for a fact they’ll be mean to me. Forget that crap.”
“Smart girl,” Gram says.
Kara kisses her grandma on the cheek. “I’ve learned from the absolute best.”

If Jagger could choose one song to sing to Kara, to calm her fears, to help her let go and trust him, "Home" by Phillip Phillips would be the song he'd choose.


And that's all for this excerpt. Thanks so much for reading!

And please go HERE to check out one of my CP's cover reveal. So excited for Kimmy! Go show her some love! :)