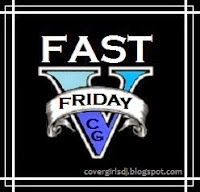 It's time for Fast Five Friday! FFF is a weekly blog hop created at Cover Girls. Its purpose is to connect with writers, readers, viewers, and bloggers, and the topics revolve around lists.
Go HERE to learn more about Fast Five Friday, or you can click the tab button above in this blog.

Are there any cancelled/retired TV shows that you miss?
What items would you have on a deserted island?