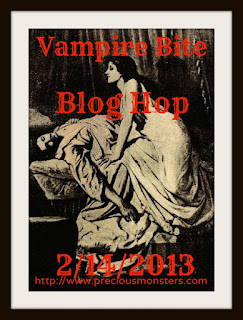 Jolie Du Pre of Precious Monsters is hosting the Vampire Bite Blog Hop. Click HERE to check out her blog as well as other bloggers participating in this blog hop.

Here's my list of best vampire characters, in alphabetical order...

*Damon Salvatore - from The Vampire Diaries (TV series more than the book) played by Ian Somerhalder. From his smirks to his one-liners, he has me drooling, melting, and laughing all at the same time.

*David - The Lost Boys. He's the leader of the vampire gang and pure delish with his vampire ways.

*Deacon Frost - Blade. Da-yam. This dude puts all other "bad" vampires to shame.

*Dimitri Belikov - from Richelle Mead's Vampire Academy series. When he's a Damphyr, he's a total badass, but when he turns to a Strigoi in book 4, he's AMAZING. Seriously, I would've let him turn me. He was that yummy.

*Edward Cullen - Twilight series. He's another brooding and beautiful vampire with the ability to read your mind. *blushes*

*Louis de Pointe du Lac - from Anne Rice's novel, Interview with the Vampire. He's brooding and beautiful. And Brad Pitt played him perfectly in the film.

*Stefan Salvatore - from The Vampire Diaries. He's the younger brother of Damon. While Damon is ornery, Stefan is the opposite. Sweet and protective.

And that's it for me folks. Make sure you go HERE and check out Jolie Du Pre's site and the other bloggers doing the blogfest.